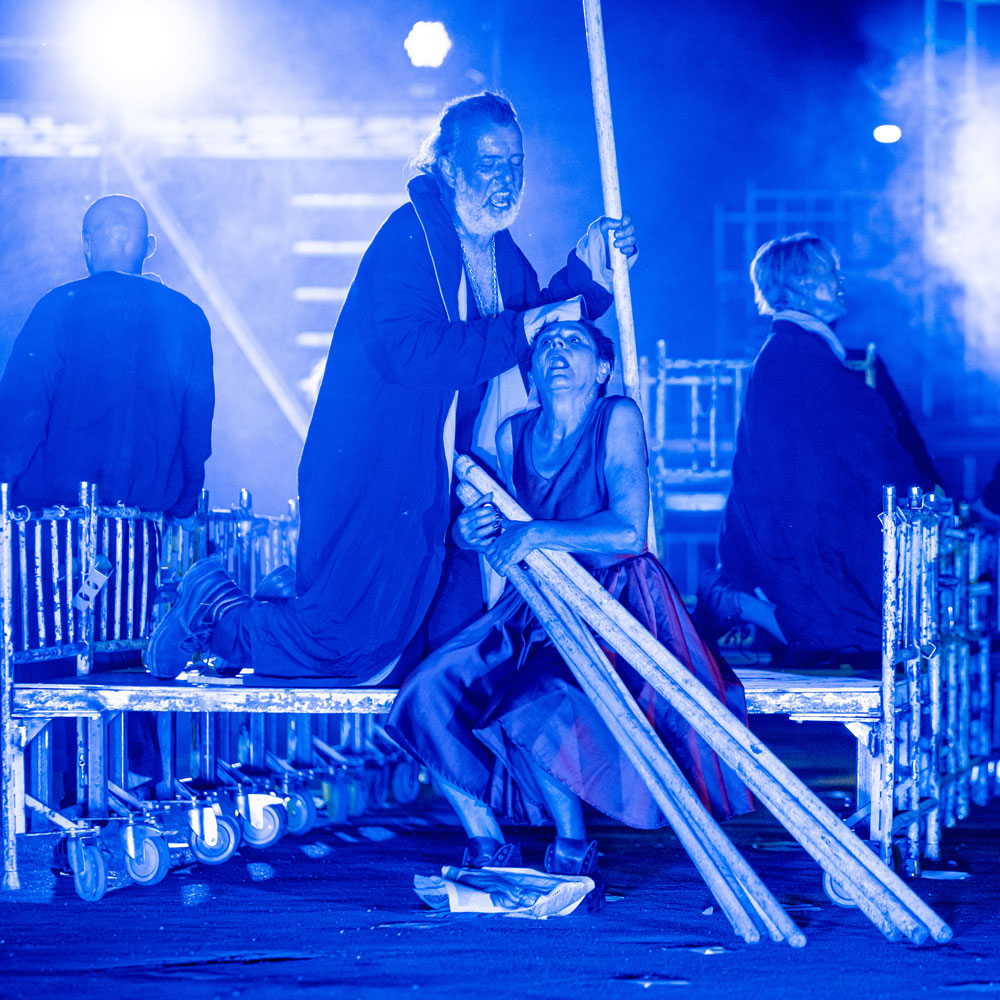 They will repeat the atrocity and the beauty.
They will be good for each other and they will bite one another. They will create their god of whiteness and build for themselves a white hell. They will go on crusades. They will cause pain, repeat old gestures of tenderness, reach the bottom of debauchery.

A monumental open-air spectacle. 10 years after its premiere, in the year when the corona pandemic made the world stop, it is an even more severe diagnosis of contemporary mechanisms, irrational choices, fear, dishonesty and disinformation.

The production, nominated in 2012 in Edinburgh for the Total Theatre Award in the category of physical/ visual theatre, has now been performed over 100 times, travelling around the world and attending 48 festivals in countries such as Austria, Belgium, Colombia, Costa Rica, the Czech Republic, Germany, Iran, Mexico, Portugal, Romania, Russia, Scotland, South Korea, Spain and Ukraine.

The KTO Theatre was established in 1977. Its first production was The Garden of Delight the first ten performances of which were closed to the general public and presented to no more than several hundred people. In the following year, however, they were attended by the audience of nearly three thousand in Krakow and some other Polish cities.

In the 43rd year of the company’s operation the statistics are considerably different: over 80 productions, performed indoors and outdoors in Poland and around the world, have been attended by more than 3 000 000 people. The group has visited over 250 cities in over 40 countries on 5 continents. It has performed in Brazil, Canada, China, Colombia, Costa Rica, Iran, Mexico, South Korea, Tunisia, the USA, and almost all the countries in Europe.

The worldwide stature of the KTO Theatre has also been reflected in its involvement in numerous international projects. Among the most important ones there were Operation Opera, a show created together with the Norwegian National Opera in Oslo, and The Refugees, a theatre installation presented in Leipzig to the audience of 120 000 viewers on the occasion of the 20th anniversary of the fall of the Berlin Wall.

For 43 years now the KTO Theatre has operated under the leadership of Jerzy Zoń.

Saramago’s universe put together with that of the politically concerned group KTO Theatre, created the form of this masterpiece. The monumental staging of this story succeeds admirably, and deals brilliantly with the epic proportions of Saramago’s story (…) A superb interpretation of this fantastic novel.

(…) a powerful and beautifully acted visual drama about a society’s instinctive response to a crisis that kills no-one, but changes everything, and reveals many disturbing truths.

(…) it is a must to go and see it. Watch. Perceive. Perceive at all costs.

(…) it’s hard to tear your eyes off the show, no matter how harrowing it becomes.