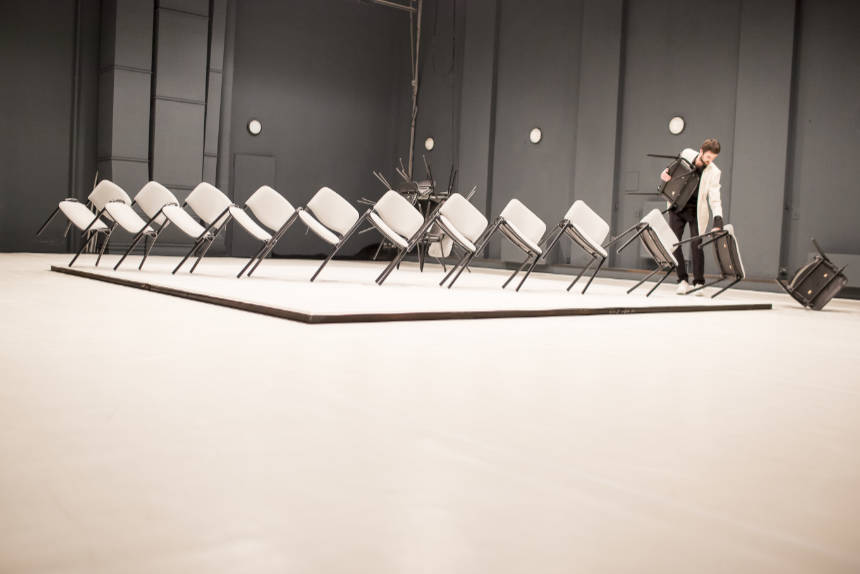 Viktor Černický dives resolutely into the effort for indefinite construction, reconstruction and deconstruction of the universe built in the show PLI, comprising the activities of a single man obsessive rhythm and… 22 conference chairs. The outcome is an intelligent and playful show – a physical metaphor for endless human dynamics, patience and striving that turns even the most ordinary objects into incredible pieces of architecture. As stated by the reviewers of the Dance Zone magazine, it is not just a great performance with a unique personal style of creation but also a visionary step towards the theatre of the future where fundamentals of conventional art forms no longer apply.

Viktor Černický creates shows that comprise dance, performance, circus, and physical theatre. His first solo performance Parolapolea earned him nominations in categories Dancer of the Year and Dance Performace of the Year at the 2017 Czech Dance Platform, and was granted a special award in the form of participation at the Choreographic Research Week at the B.Motion Festival in Bassano del Grappa, Italy. His latest solo piece PLI received the Audience Award and the Total Award of Czech Dance Platform 2019. Alongside his own work, Victor has also collaborated and performed with Jaro Viňarský, Dominique Boivin, Daniel Gulko and Compagnie Mossoux-Bonté.